From Inside Higher Ed

In March 2013, when the Faculty Senate at Mary Baldwin College met with the college’s president, tensions were running high. Professors at the private women’s college in Staunton, Va. had not received raises in six years. And a mandate from the Board of Trustees instructing faculty to examine low-enrollment majors had ignited rumors. Professors worried the college would cut certain liberal arts programs: French, Spanish, chemistry and other majors that attracted few students. Surrounded by her colleagues, Ivy Arbulú, an associate professor of Spanish, spoke.

“There are no ‘expendable’ majors, and most certainly not if what is expendable and what is not is decided by the popularity of majors amongst our students,” she said. “All majors are part of the education we offer.”

The Spanish professor, known at Mary Baldwin for her rigorous standards and dedication to students, died of leukemia six weeks later. She left behind a Spanish department with just one faculty member. In September, an interdisciplinary major in Latin American Literatures and Cultures will replace the traditional Spanish major Arbulú championed. The French major, too, has been cut, and a number of upper-level course offerings in liberal arts are being phased out. 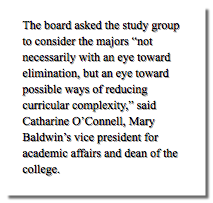 Interviews with top college officials and a number of professors (most of whom requested anonymity for fear of reprisal), as well as a review of more than a hundred pages of internal documents obtained by Inside Higher Ed, reveal an institution in transition — and in conflict. At Mary Baldwin, the administration’s focus on enrollment growth through new programs has left some faculty members convinced that the liberal arts college no longer has liberal arts at its center.

College officials maintain the institution has not strayed from its liberal arts mission. What’s occurring at Mary Baldwin, they say, is a philosophical dispute. A handful of professors are clinging to a conception of the liberal arts grounded in discrete disciplines — an idea college officials say is outdated.

“We’re at a time in education when we’re moving beyond the disciplines that were created 100 years ago,” said Sarah Flanagan, chair of the academic affairs committee on Mary Baldwin’s Board of Trustees and vice president for government relations and policy at the National Association of Independent Colleges and Universities. 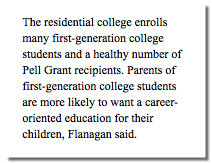 In recent years, many higher education experts have deemed many liberal arts colleges and women’s colleges — at least those without billion-dollar endowments — financially challenged, if not endangered.

Read the rest at Inside Higher Ed